Acknowledging your privilege isn’t going to be fun

By: Quinn Rhodes
In: Activism (ish)

Acknowledging your privilege isn’t going to be fun… and that doesn’t mean it’s not extremely important. I’m trying to get better at it.

If you think this particular post is a “subtweet” (can a blog post be a subtweet? Is there a more accurate word?) then I’m not going to lie, it might be.

I am doing my best to acknowledge my privilege.

I am a white, cis woman. I’m undeniably middle-class. I am also thin. All of that gives me huge privilege. It isn’t cancelled out by the fact that I’m a queer woman in a heteronormative, patriarchal society, or the fact I’m mentally ill. I can walk through the world without being discriminated against because of the colour of my skin; I am not misgendered on a daily basis; I am not told that my health issues would disappear if I lost weight; and I have parents who support me financially, even if they’re mildly homophobic while doing it.

I’m incredibly privileged – I know that. I have white privilege, cis privilege, able-bodied privilege, thin privilege…  I’m doing my best to acknowledge my privilege, and frequently still fucking up.

Acknowledging your privilege is hard. It’s not fun, but it is completely necessary. Sitting in Cara Thereon’s talk ‘You don’t see me because I’m black‘ at Eroticon was hard, because I was being confronted with my own racism. Reading intersectional feminist texts frequently makes me feel very uncomfortable, I have to face the fact that it’s far more socially acceptable for a thin, middle-class, young woman to wear a t-shirt that says #PussyPower.

So I keep learning and trying to be better. And honestly? There’s only one way to work on acknowledging your privilege. What I’m trying to do here is say that when someone from a marginalised community tells you how to support them: shut the fuck up and listen.

If they share their lived experience, the last thing you should do is tell them that them stating their needs made you feel upset. If you feel uncomfortable when you’re told how you can be a better ally, there’s a high chance that’s because you need to work on being a better ally. When someone tells you about the injustice they face, you shouldn’t centre yourself in that discussion – especially if you are not part of the same minority group.

If something they say makes you examine your privilege, please shut up and examine your privilege. If someone – to take a totally random example here – tells you that it matters to them what pronouns you use for them, you shouldn’t ask why they’re making such a big deal out of something that seems trivial to you. In that case, you’re probably a cis person, and you’re showing your utter insensitivity to trans issues.

I’m saying this as someone who has bucket-loads of privilege, and knows that acknowledging your privilege isn’t going to be fun. It’s not going to be fun, but I’d like to ask you to try. And honestly? Most of us need to try a lot harder.

As of tomorrow, I’ve been sex blogging for two whole years! If you want to help me celebrate my blog anniversary, why not buy me a coffee – the money from which, full disclosure, I will probably spend on a celebratory hot chocolate. 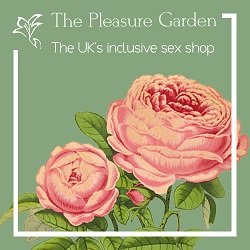