It only takes a few seconds for him to spot her. She’s sitting on a high stool at the bar, wearing the same grin that she’d worn that morning as she rode his cock. She hadn’t let him come, even when her cunt was tightly squeezed around his dick and it was all he could do to hold back his orgasm. He had no doubts that she would ensure that his cock was achingly hard again before they left the gay bar where she’d asked him to meet her.

Crossing the room in quick, almost impatient, strides, he summons the nonchalance he wishes he was feeling and leans casually against the bar next to her. Arms folded; she likes to be able to see him getting hard through his jeans, especially when they were in public.

“Why did you tell me to meet you here?”

He raises an eyebrow, but as he turns to face her he catches a guy checking him out. He can’t stop his blush, and she smirks.

“No – but if I was, it would definitely be your fault.”

He kisses her instead of replying, but she’s in charge there too. It’s a game, of course, but playing it with her is so much fun. She grins into the kiss, and they’re both laughing and breathless when he pulls back. She leans in, biting his bottom lip and not withdrawing until he lets out a low moan.

She has slapped his face before, but her words always hit him harder. For a second he can’t breath, can’t think: the only thing that exists is her words and the heat in his crotch. Suddenly he’s very aware of how hard he is, and how obvious his dick will be to her – to everyone. Exactly how she likes it.

“Do you have a butt plug in your bag?” He’s proud that his voice doesn’t shake as he asks the question.

“You’re adorable when you’re blushing. And before you ask, no: I won’t let you take my bag in an attempt to preserve some of your dignity. We both know that you like the fact everyone will be staring at you, looking at the plug you’re trying to hide in your hands and knowing that you’re about to do dirty things in the toilets.”

Her hand is on his thigh, and she accentuates her words by scraping her nails down the inside of his leg. He has to bite back a whine.

“But I’ll be nice: I’m not going to make you find a guy to suck off while you’re plugged – I know how much you’d love that. I’ll even let you use the cubicle for privacy while you fill your ass. This time.”

“Bitch,” he breathes again, and she smirks.

“Want to say that again? I could make you ask someone else to help you plug yourself. After all, you do get off on spreading yourself open, slut. So do it: call me a bitch again.”

It’s a dare, but he doesn’t take it. As much as he loves it when she changes the stakes, for tonight the idea is hot enough. She briefly brushes her hand over his cock, and he shivers. He’s dangerously close to the edge already – after her teasing yesterday and the excruciatingly good fuck this morning – and if he knows her at all, she’ll have brought the plug that will press on his prostate with every step.

She is cruel in a way that pushes all his buttons, and it shouldn’t be so fucking hot.

He holds his hand out for the plug, but she doesn’t pass it over until he asks – ask nicely, slut – and ‘accidentally drops the lube packet on the floor. He can feel her gaze on him as he bends over, and it’s unlikely that she’ll have been the only person perving on his arse, as she reminds him when he straightens up again. She slaps his arse as he walks past her on the way to the toilets.

Of course he’s blushing – wouldn’t you be?

She has plugged him in these toilets before, but he’s never done it himself. The bathroom feels eerily quiet as he unbuckles his belt and pushes his jeans down. They sit around his ankles, restricting his movement in a way she’d approve of. He palms his cock once, twice, through his boxers before peeling them down and letting his cock spring free. He rips open the lube packet – most of it on the plug, some on his (already aching, damn her) cock.

He takes a deep breath before pushing the plug inside, and in that second he remembers that this is only the first part of her plans for him tonight.

Questions about fucking: why you should talk about sex
Show stigma the finger: fuck off heteronormativity 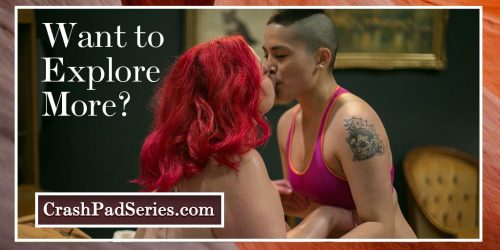 [CW: period, perviness] I bought some black boxer briefs yesterday for free bleeding when I'm on my period. There is a small chance that since putting them on I keep rubbing my junk and then sniffing my fingers. I'm super turned on by the smell of my own crotch.

"This was no limp, hands-outstretched-and-chain-dangling arty shot: this was direct and specific and tight. Yanked on so you could see the pressure being put on the chain. Not passive: active. Not gentle: rough." Mmmff. This part in particular of GOTN's post is very, very hot. twitter.com/girlonthenet/s…

@SilverDomUK Yes! I mean, there is a chance that I spent *slightly* more money than I planned to, but I feel really good!

Shopping in the men's department is fucking incredible. #BabyTrans

And they call ME a dork. ❤️ twitter.com/QuenbyCreative…