This post was originally written for Smutathon 2020, where intrepid sex writers from around the world spent twelve hours writing filth to raise money for Endometriosis UK. I didn’t end up writing much smut but we did reach our filthy fundraising goal, which is awesome. This piece features anonymous (ish) university sex and seven fucks.

“And though I can’t recall your face
I still got love for you”
~ seven, ts

It’s not entirely anonymous sex, because she knows who all of them are. She just doesn’t plan to see them again after this week. She needs to get laid, she knows that. She hasn’t had sex since her Ex – the one who will forever be capitalised as The Ex when she talks about him, because saying his name is just too painful. Seven fucks in one week, she tells herself, will be a nice palate cleanser. A chance for her to fuck away the remains of her broken heart; a challenge to prove to herself that she doesn’t need him to have mind-blowing sex.

They’re working late in the library too, even though it’s only the second week of the semester. Honestly, she hasn’t been working for the last hour: she’s been staring at their shoulders and their cheekbones and their ass in the tight corduroy trousers as they pace up and down the shelves, muttering to themselves. Their diligence is attractive, and she can’t remember the last time she watched someone this closely.

They catch her staring but she doesn’t care, and a few minutes later they’re making out among the stacks. They finger her with more skill than she’s expecting, and their hand presses over her mouth when she comes, muffling her moans. She returns the favour, and kisses their neck as they clench around her fingers.

It might be hotter because she doesn’t know their name.

She’s the TA for her Russian literature class – is that cheating? She stays behind to ask a question wearing a deliberately low-cut top that she knows will attract her attention. Playing the slut is fun, she enjoys watching the older student’s dick twitch as she  try to fight her own arousal. Her arousal wins, and they end up making out in the empty lecture theatre.

They don’t fuck there, but they do fuck later. It’s not as good as the fantasy of being fucked in front of everyone, but this time she doesn’t have to be quiet and she lets out a whispered stream of filth as she rides her. Afterwards they sit naked on the bed, drinking wine and talking until somehow her hand is around her dick again.

It would be rude not to fuck her again after getting her hard.

She’s bored and he’s there. She doesn’t care if her friends mind that she ditches them for the cute boy who shoots her a shy half-smile when she joins him at the bar. She likes his accent and his charm and how long his fingers are, but mostly she likes how it feels to think about someone else’s fingers inside her.

It’s not a drawn out flirtation – she takes a filthy delight in how red he blushes when she asks him if he wants to fuck. She leads him to the alley at the back of the pub and kisses him roughly. She doesn’t want his dick inside her, she wants it in her mouth and his hand in her hair as she kneels in front of him. He obliges.

It’s a messy blow job, and savours the sound he makes when he comes in the back of her throat.

He’s the bartender, and if he doesn’t know exactly what she’s just been doing then her torn fishnets and Cheshire cat-like grin help him guess. She’s cocky with the taste of the cute guy’s spunk in her mouth and openly pervs on his arms as he makes her drink. She is instantly wet when he looks straight at her and asks if she’s asking for a fuck.

She is, of course. She waits until everyone else is gone, allowing herself to taste the arousal and anticipation that flies between them as they flirt. When he’s finished closing up he kisses her slowly – too fucking slowly – until she’s begging for his dick. They fuck on the bar itself, her legs wrapped around his waist. They fuck again at her flat later, and it feels more intimate than she expected it to.

He stays over and in the morning he leaves his number in her phone. She can’t bring herself to delete it.

They’re a couple who are looking for a third, and when she comes across their profile on a dating site she swipes right straight away. She knows one of them, vaguely, from one of her classes last year. She meets them for drinks, more nervous than she’d like to admit, and there’s instantly chemistry. Fuck, she’s missed chemistry.

She uses a strap-on for the first time that night, as the three of them attempt double-penetration and end up in a giggling pile of limbs. It doesn’t matter, there are so many other things to try, and she

It’s 3am when they’re finished but she doesn’t want to stay over so they order her an Uber. It feels like love.

It’s Sunday and she’s tired. Half-asleep, her hand finds it’s way into her pyjama bottoms. She gets herself off with her fingers: once, twice, three times. Nothing fancy. No performative moans or teasing looks as she arches her back seductively, just her face scrunched up in a pillow. They’re easy, lazy orgasms, and when she’s finished she feels more satisfied than she has all week.

She lies there catching her breath, marvelling at how there’s no need to talk or move; she can revel in second of her post-orgasm glow without any interruptions. Eventually she forces herself to get up. She pulls on a t-shirt and pads through to the kitchen to make tea.

She doesn’t even realise that she hasn’t thought about him for seven whole days.

Should I be embarrassed that I wet the bed last night?
A skin-care novice reviews The Butters Hygienics' zit zapper 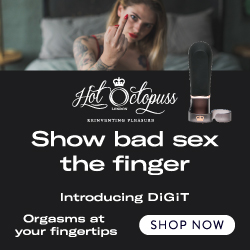